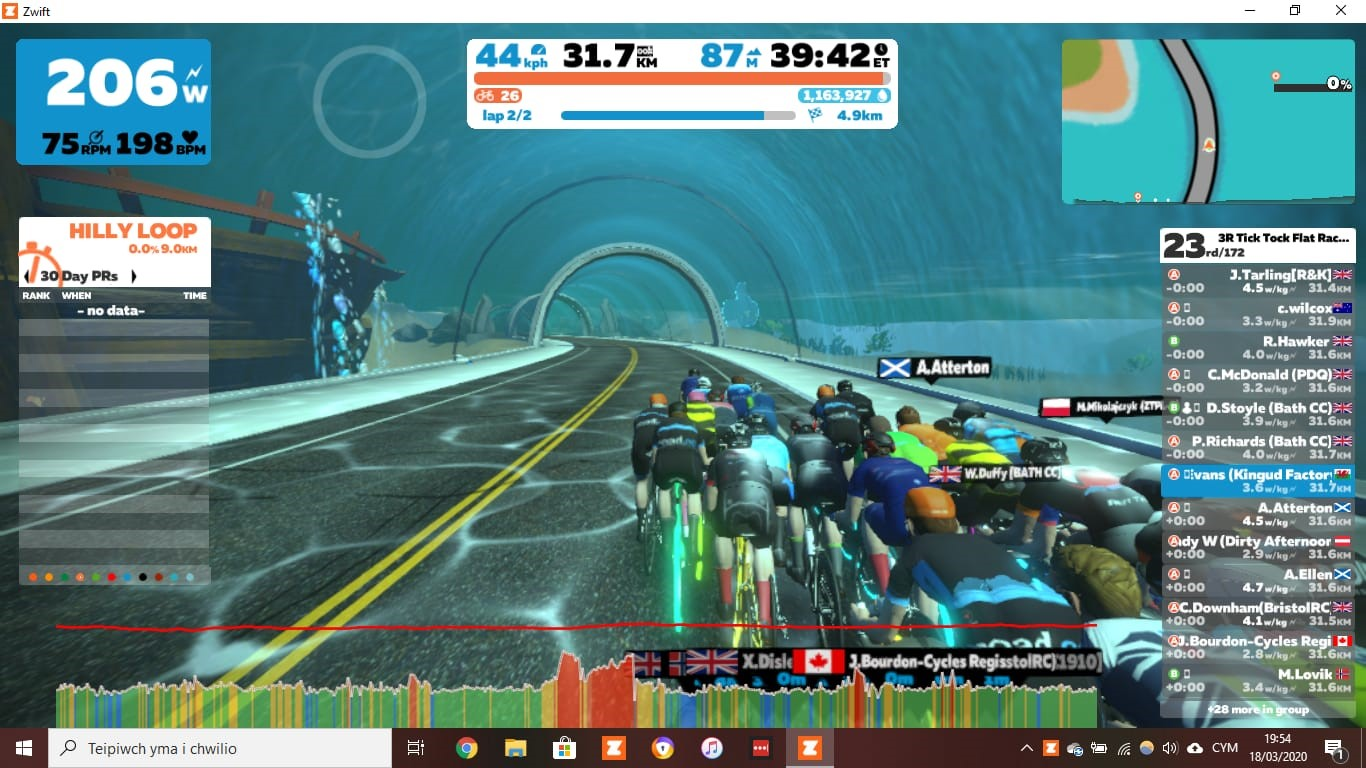 Great turn out from Bath Cycling Club and riders from local clubs. Hope I get the Bath team list correct

There were local riders from VC Bristol, Salt And Sham, Bristol RC, PDQ, Performance Cycles, Swindon, BoA and Rowe & King. At times it was a little difficult to identify other riders from different clubs – but we will work on that for other races. There were 170 riders in total.

There were several riders making their debuts on Zwift racing – and no matter how many times you tell people that the start is hard, nothing prepares you for the first 2minutes of a Zwift race. Need to wind up the power with 5 seconds to go – 1.5 times FTP is recommended. And hold it there until it settles down. Once over this hump, its a question of finding the right group and holding on.

The Tick Tock course has a hill after 10-12 minutes, its a balance between trying to hold on to the group and controlling your hear rate so you are ready for the attack up the hill. Juts like a race IRL its all about positioning, holding your place in the bunch and saving energy. The first hill is about 90 seconds, and its another all out effort. Aiming for maximum Heart Rate at the top of the hill, its all about hanging on (unless you are a Duffy or a Gardner).

It’s normally where the groups split into Categories – 32 made it over the top of the hill in the first group. All the Bath A group riders plus me – there were still 11 B Cat riders in this group, including a couple from SAS (although not identifiable!!). Once over the top, its all about the recovery, but hoping the group pushes on so that the group behind does not catch.

The next hill is out of the underwater tunnel. Sam Duffy put in a massive effort – plenty of red numbers as he sprinted away from the group. The move did not stick, but helped to drop a few more. Sam then had a mechanical and power drop and was dropped from the group – a shame after his top 25 finish at the Betty Pharoah Nat B race on Saturday.

The race at the front settled down to “Club Run Pace” – well thats what Paul Richards said – 3.5w/kg is no club run for me!

The second time up the Grove climb was a little more relaxed and no further riders were dropped – and with less than 8kms to the finish, thoughts turned to the finish. A hard last climb strung the bunch out. Riders are then split between those who are just pleased they have made it that far and are doing all they can to cling to the back of the group, those who have a little left an try and hold their position as far up the group as possible – and those in it for the sprint. Will Duffy was the only local rider in the last category – great sprint for 2nd.

There were great stories throughout the race – I know that Philly, Steve and Richard Jaques were figthing it out in the Cs and kept seeing each other fly past.

The main group of Bs was very competitive with some good riders from local clubs battling it out.

The plan is to have Wednesday evening as race night. Then Saturday and Sunday as more social rides when we can get on the Zwift companion app and chat to each other. Maybe even try a coffee break/discord channel. Details to follow.

Overall Results of Local Club Riders are difficult as not all the clubs have sorted the Zwiftpower Club. Steps to take

4 – Creat a club in Zwiftpower

5 – Register with your club on Zwift power.

Some Notable performances that I have picked up.

I am sure that there were many more local riders that I did not spot – a more complete report next week.